A community of research and practice on extreme heat.

The Extreme Heat Network is an interdisciplinary community of research and practice on the causes, impacts, and strategies to increase resilience to extreme heat. Please contact us if you would like to get involved. 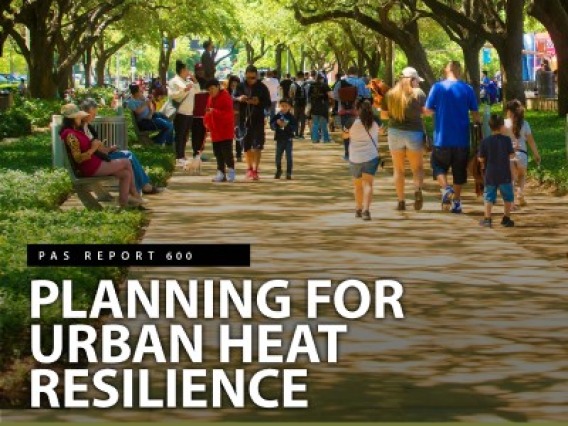 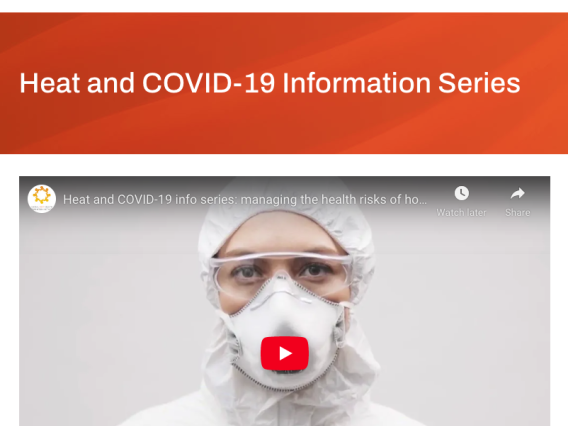 The Global Heat Health Information Network (GHHIN) information series aims to highlight some issues and options to take into consideration when managing the health risks of extreme heat during the COVID-19 pandemic. 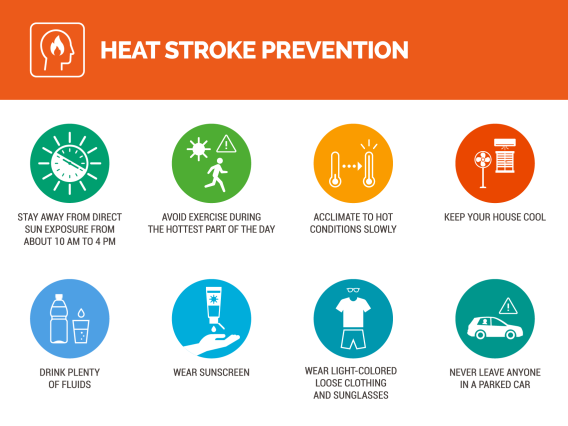 Learn how to recognize, prevent, and treat heat-related illnesses with resources from the Arizona Department of Health Services' Extreme Heat portal.

There are no upcoming events listed.

A list of just some of the research projects at The University of Arizona related to extreme heat. Please contact us if you'd like to feature your project.

Pinal County Public Health Services District (PCPHSD) conducted syndromic surveillance using Biosense ESSENCE syndromic surveillance software to determine the burden of Heat-Related Illness (HRI) among Pinal residents, better understand HRI risk factors/populations, and develop effective interventions to reduce the number of HRI cases that occur annually. Project activities included a descriptive epidemiological analysis of HRI cases from historical hospital discharge data, syndromic surveillance and mortality surveillance of HRI cases among county residents during May-September of 2018, medical chart reviews, and interviews with cases who visited an ED or were admitted to a hospital for HRI. The purpose of this surveillance and analysis was to understand the burden of HRI within the county, as well as characterize HRI risk factors (e.g. occupational, recreational, economic). From May 1st to September 30th, 2018, temperatures reached 116oF. During these months, ESSENCE identified 212 HRI cases. 168 cases were confirmed as true HRI following thorough chart reviews.

This interdisciplinary research project seeks to harness digital visualization to increase public education and involvement in policy decisions, as cities consider ways to adapt to extreme heat brought on by climate change and the urban heat island effect. The project includes the creation of an interactive visual learning tool that helps people understand the implications of climate change, the urban heat island effect, and extreme heat, and make informed decisions about their own preferences for strategies to reduce impacts. The digital tool will include information about extreme heat and the impacts of a variety of planning and design adaptation strategies. After participants have examined material in the learning modules, a poll will collect their feedback about desired interventions and data about the impact of the learning process.

The impacts of the urban heat island (UHI) are well documented, including increases in heat-related public health issues, stresses on urban ecology, and energy usage to mitigate the higher temperatures. UHI is of particular concern to cities in the Southwest, since it counteracts the cooling that otherwise normally occurs at night. While UHI mapping and modeling has become more sophisticated in recent years, there is still an information gap between the heat maps and models, urban planning and design strategies to decrease heat, and the use of that information in policy decision-making. This study focuses on documenting the current use of urban heat maps and models in communities in Arizona and New Mexico and evaluating best practices and opportunities to increase their usability.

This U.S.-Mexico border heat-health partnership began as a pilot project of the National Integrated Heat Health Information System (NIHHIS), focused on the region encompassing El Paso County (Texas), Doña Ana County (New Mexico), and Ciudad Juárez (Chihuahua). Partners include academic researchers from universities along the U.S.-Mexico border, members of the local National Weather Forecast Office, city and county officials in each of the three focus cities, and state officials from New Mexico, Texas, and Chihuahua. The ultimate goal of the partnership is to reduce heat-related illness and deaths in the region by developing the capacity to prepare for and respond to extreme heat events. Several working groups ("work streams") are addressing these issues by improving regional heat forecasts, assessing current knowledge of extreme heat vulnerability and public health risks, improving public health data collection, and improving public awareness of the impacts of extreme heat.

To promote a strategy to address inequities in GI funding, siting and implementation, this project embraces a collaborative, participatory community engagement project to facilitate the design and adoption of GI demonstration projects in the communities, traditionally underserved, low-income communities in southern Tucson.  The project has also partnered Bo Yang, Ph.D., and a graduate landscape architecture studio to develop a green infrastructure plan for STAR Academic High School with solar canopies and tree canopy for increased shade.

Resources for community members and practitioners related to extreme heat. Please contact us if you have additional resources to suggest.

The Global Heat Health Information Network (GHHIN) is an independent, voluntary, and member-driven forum of scientists, practitioners, and policy makers focused on improving capacity to protect populations from the avoidable health risks of extreme heat in a changing climate. GHHIN is spearheaded by the World Health Organization and World Meteorological Organization Joint Office for Climate and Health, and the United States National Oceanic and Atmospheric Administration (NOAA) Climate Program Office.

The National Integrated Heat Health Information System (NIHHIS) is an integrated system that builds understanding of the problem of extreme heat, defines demand for climate services that enhance societal resilience, develops science-based products and services from a sustained climate science research program, and improves capacity, communication, and societal understanding of the problem in order to reduce morbidity and mortality due to extreme heat. The NIHHIS is a jointly developed system by the Centers for Disease Control and Prevention (CDC) and the National Oceanic and Atmospheric Administration.

Learn how to recognize, prevent, and treat heat-related illnesses on the Arizona Department of Public Health (AZDPH)'s Extreme Heat portal.

The Fourth National Climate Assessment (NCA) was written to help inform decision-makers, utility and natural resource managers, public health officials, emergency planners, and other stakeholders by providing a thorough examination of the effects of climate change on the United States.

The Urban Land Institute's Scorched: Extreme Heat and Real Estate report outlines how extreme heat will affect the real estate and land use sectors and highlights the leadership and the potential positive impact of the real estate sector in implementing “heat-resilient” building designs and land uses.