Engaging low-income communities in the development of a greenway in Tucson, Arizona

Green infrastructure (GI) – or spaces with permeable surfaces dominated by vegetation – has been shown to have numerous positive community benefits. These include: less noise and stress that affect mental health, reduced air pollution that affect respiratory diseases, and an enhanced thermal comfort that encourage physical activity and social interaction. Below, we discuss a recently-funded project in southern Arizona that looks at how green infrastructure can involve low-income communities and in so doing, enhance the quality of life of residents.

In cities, one of the GI techniques that yields well-recognized benefits is stormwater management, which can reduce floods and enhance resilience. Where such techniques are employed, GI has a basin-like form and the surrounding areas need to have sufficient slope to direct stormwater to the GI, allowing its infiltration into the aquifers. This way, GI not only reduces floods and their subsequent damages to urban infrastructure, but it also replenishes aquifers enhancing water security. This is particularly the case in arid cities that depend on groundwater as their main water source.

Local city governments in arid regions have realized the benefits of GI and the reduction in floods and damage-repair costs. In addition, the vegetation that is part of GI reduces urban temperatures, making the cities that employ these techniques more comfortable for their residents. Human thermal comfort is related to a better mood, and in hot climates, a better mood is related to less aggressive behavior and less crime incidents.

Nature provides many wellbeing benefits beyond reducing temperatures and improving mood. Greening a city creates opportunities for recreational pursuits that increase physical activity, lowers stress, reduces noise, minimizes feelings of overcrowding, and enhances social interaction among neighbors. By greening cities, ecological systems are allowed to function, thereby enabling social systems to benefit. More and more cities around the world are greening their roads, sidewalks, plazas, and even their buildings to derive these benefits, while also increasing resilience and adapting to climate change.

Tucson, Arizona, is not an exception to this trend. The city is located in a hot and arid climate and sometimes experiences seasonal floods as a consequence of severe storm events, most especially the annual summer monsoon. Residents, neighborhood associations, NGOs, and local government agencies have recognized the benefits of GI and have invested in GI projects. In recent years, the local government, in partnership with community NGOs, have launched special programs to promote GI development in Tucson. Programs include grants to develop diverse types of GI, rebate systems to recover implementation costs, training, and free plants and trees. Many neighborhoods have seized these opportunities and little by little, are transforming their roads, sidewalks, and front yards into functioning exemplars of GI.

But the adoption of such infrastructure has not been spatially uniform. Most notably, low-income communities within the poorer, south side of the city have not benefitted from these types of investments. Comprised mainly Hispanic residents, many immigrants from Mexico and other Latin American countries, these residents are mostly low-income. Programs to implement GI traditionally ignore these communities, leaving them vulnerable to flooding that paralyzes the traffic and damages urban infrastructure, and Summertime extreme heat temperatures.

The implementation of GI in Tucson has become a palpable social and environmental justice issue.

Why is there inequity in access to GI in communities?

In order to answer this questions, my colleague Prof. Andrea Gerlak and I, partnered with Catlow Shipek of the Watershed Management Group, a local NGO that works on the design and implementation of GI in Tucson. We were recently awarded funding from the Agnese Nelms Haury Program in Environment and Social Justice at the University of Arizona better address equity and justice issues around GI and urban connectivity in Tucson. We will engage these communities in the development of GI along a road that has been designated as a bike route. By combining a bike lane with GI we hope to create a greenway that serves both social and ecological systems. As a community-university partnership, this project involves several local organizations, including the Living Streets Alliance, the Sonoran Institute, Tucson City Council Ward 1, the City of Tucson Department of Transportation, and the City of Tucson. As scientists working on water security issues related to policy, we offered to leverage the expertise of the Udall Center for Studies in Public Policy in stakeholder engagement.

To better address equity and justice issues around GI and urban connectivity, our project is designed to engage communities along the Liberty Bike Boulevard, a 4.85-mile route of existing residential bike routes on Tucson’s south side that includes some of the most economically disadvantaged areas of Tucson. Through a community-university partnership, this project will pilot and model a participatory, iterative stakeholder engagement process that will engage community members from project conception through implementation

We have a great deal of exciting work ahead of us! For the next two years, we will work together to engage communities along Liberty Avenue. in southern Tucson, where the Tucson Department of Transportation has authorized the development of a greenway using federal funds. This road is a designated bike route that links residents to multiple amenities including a library, a transit station, numerous parks, and more than a dozen schools. The greenway is expected to serve residents not only as a safe route to schools and amenities, but also as GI that would decrease floods and extreme heat.

We will collaboratively design and conduct a series of workshops to engage community members in the development of the greenway. Rather than taking the top-down approach—in which authorities come and implement a project with their own needs assessment—we plan to do a bottom-up approach, where residents are included from the earliest stages of the project. We expect that by using this approach, residents will actually use the greenway and make it their own.

We have two main research objectives. First, we will co-produce a participatory, iterative engagement process with communities to explore GI along this greenway; prioritize demonstration projects; and provide input on project design, implementation, and evaluation. By thus engaging the community, we expect them to learn about the benefits of GI. Our second objective is to build capacity, social capital, and communication between community members, city officials, neighborhood leaders, university scientists, and local NGOs around GI strengthening and expanding the network of actors.

Designed as a pilot project, our efforts can serve adjacent neighborhoods who can learn from and benefit from these efforts. In addition, we hope that this greenway, in conjunction with GI implementation, can help reduce the impact of floods, alleviate extreme heat, and improve the health of the residents by providing safe and shaded pathways to walk and bike. Finally, through workshops and other community engagement activities, we expect neighbors to interact with each other, connect with different organizations, and enhance their sense of community. 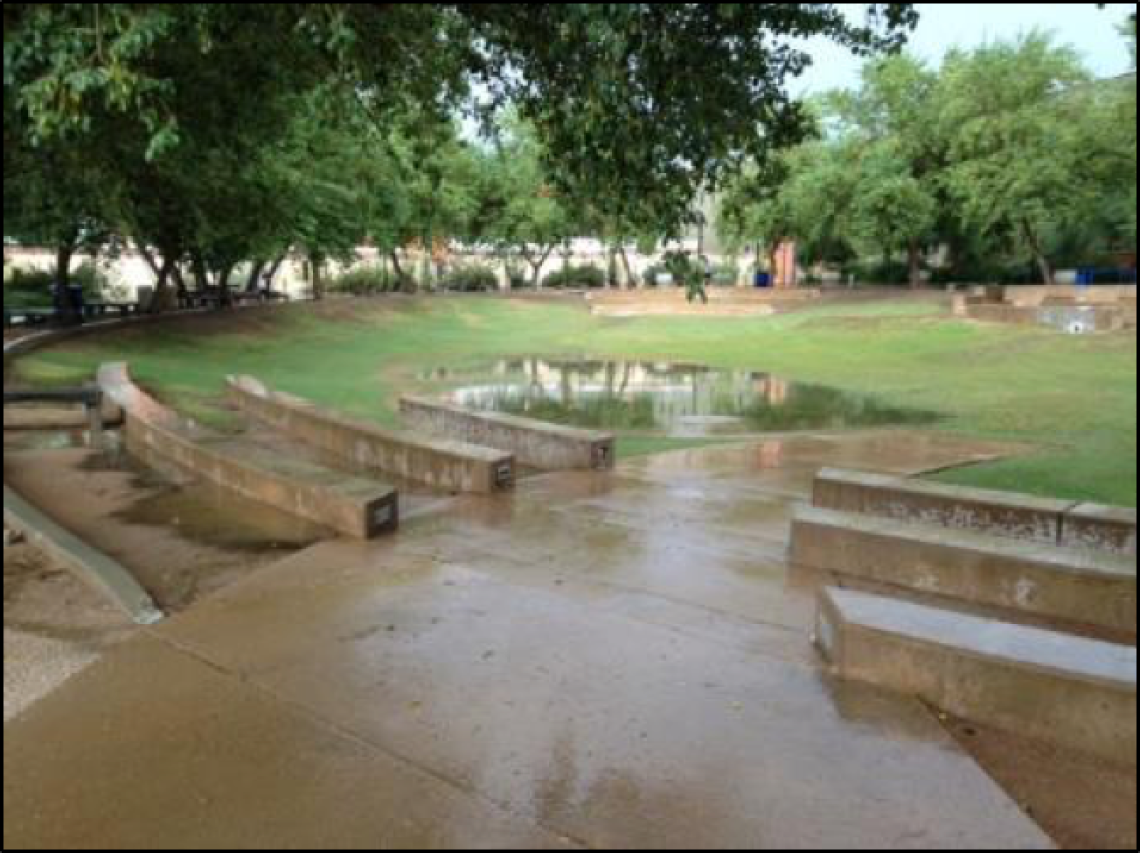 Green infrastructure at the University of Arizona main campus, where rainwater is infiltrated into the local aquifer, while providing greenspace for people and species. 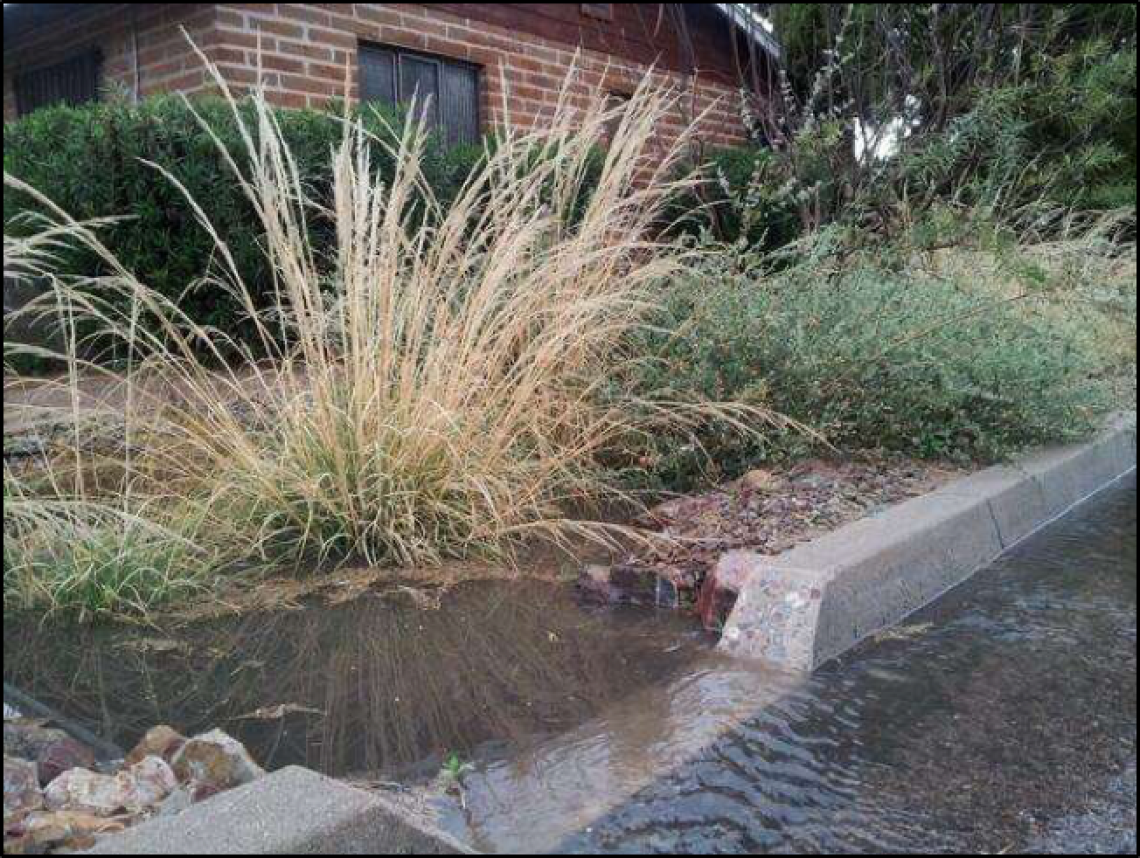 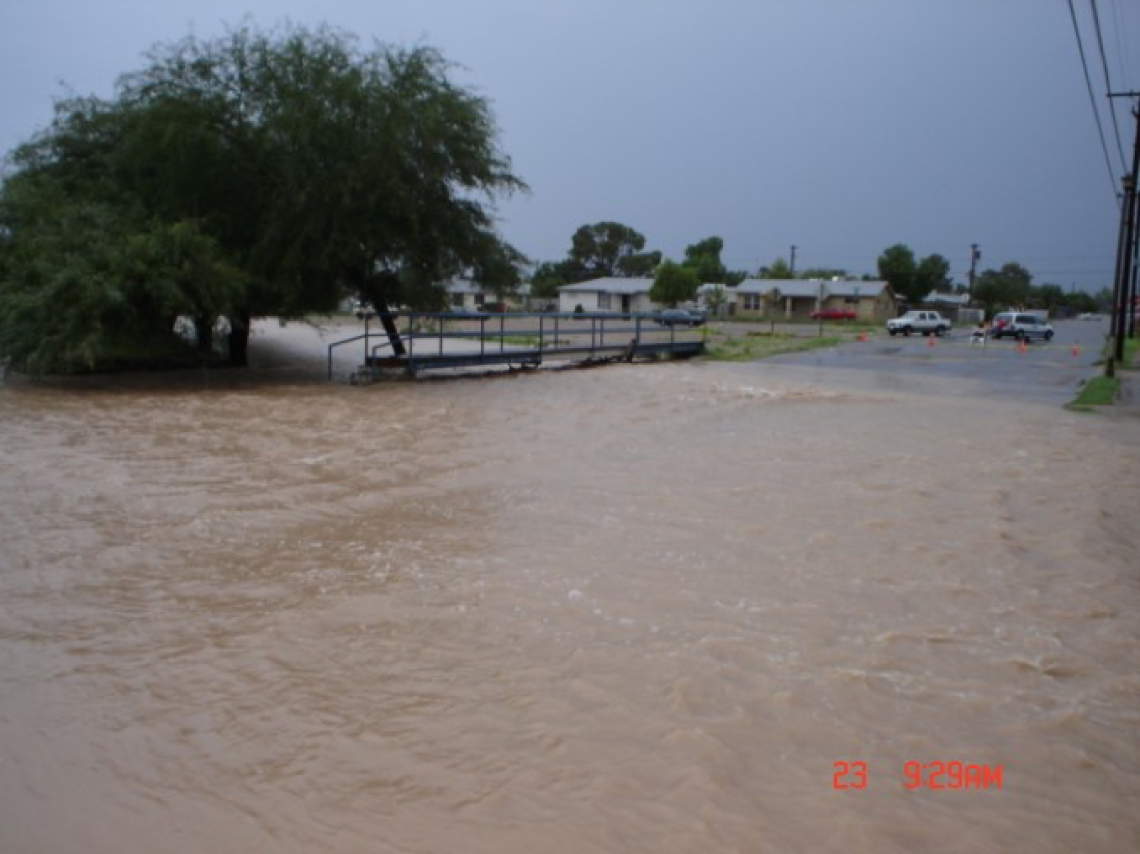 Flood during a storm event in the south of Tucson

Relationship between tree canopy and surface temperature in the south side of Tucson (red circle). Right: Tree canopy cover (shown in a green gradient) is disproportionately low. Left: Regional surface temperature (red and yellow colors show higher temperatures) is higher in this area (maps from Pima Association of Governments)

Sociodemographic data for the south side of Tucson (red circle). Left: Percent of Hispanics is higher in this area (higher percentages are shown in dark blue). Right: Median household income in this area is $20,000, while the estimated median household income in the county is $47,099 (higher income is shown in dark colors) (data from City-Data.com and maps from Pima Association of Governments). 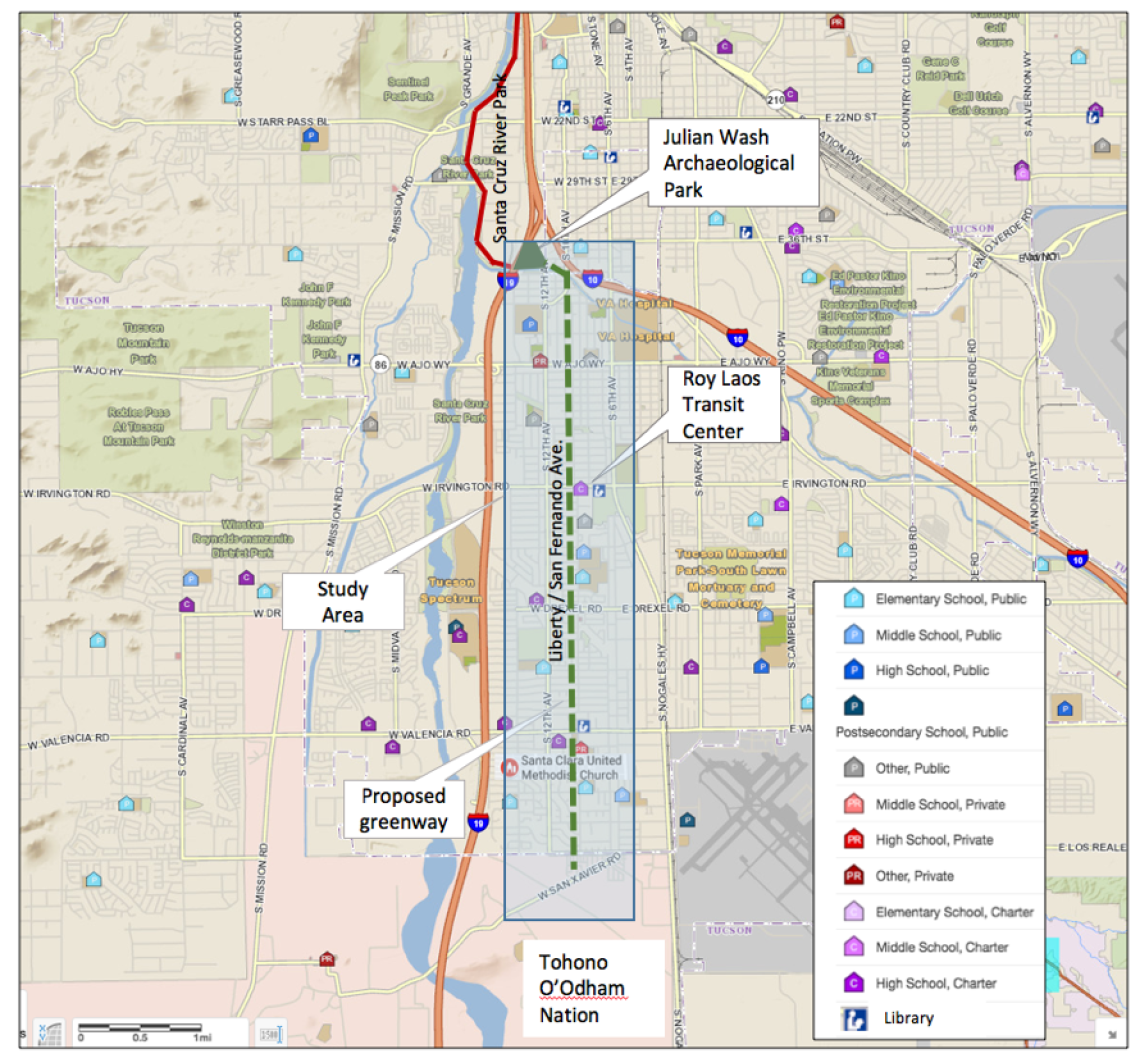